Today we had the pleasure of having Matt Cooper [Author, TV Presenter & Radio Presenter] visiting the school. Matt was a former pupil of the school and graduated with flying colours in 1978.

The Bodhran Bookills played a number of tunes for Matt on his arrival in the yard, despite the adverse weather conditions.

Matt then chatted briefly to the boys on his time in St. Joseph’s. He even remembered being in the same class as Mr. O’ Donovan’s brother!

The boys from fifth and sixth then interviewed Matt and the standard of questioning was exceptional. Matt is probably worried about one or two of those boys taking his job as the host of the Last Word after the interview!

What would you rate as your greatest achievement?

Can you tell us about some of your experiences in North Korea?

Final part of the interview. 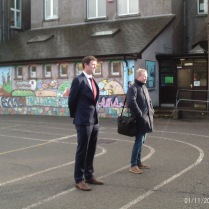